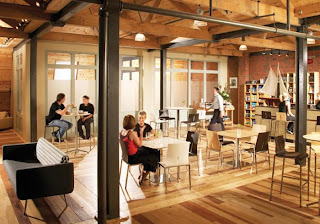 Let's not sugar coat it (if you'll excuse the pun)... we like to eat, and we like to eat well. A huge part of eating well comes from your surroundings, so creating the right atmosphere is important. Now we're not necessarily talking about a 5 star black tie dinner - we're talking about your basic everyday lunch. It's really quite simple to create a classy, stylish and functional café/dining area, whether you're making a breakout space for employees to take their lunch or opening up your very own bistro.

There is a veritable smorgasbord of options to choose from when looking into café and restaurant furniture, in different styles and at various price points. The seating for example can be wooden or acrylic, or it can be upholstered for even more comfort and variety. Recent advances in manufacturing techniques means that shaped chairs don't have to cost the Earth. Acrylic can be styled far more efficiently now than ever before, and the benefits are obvious for everyone. Not only can we manufacture beautiful styles and designs much easier, we can also pass the savings on to you, the customer. But if styled acrylic isn't quite your bag then why not look into our more traditional wooden designs, or upholstery options which provide even greater scope for variety and personality.

It's all well and good to be sat in comfort and style, but you can't exactly expect people to eat off their lap, can you? we've amassed a lovely range of tables to suit your style and your budget. With different bases, tops and finishes, you can create the style that you need to really wow your diners. Standing height tables, with the option of additional stools, can add an extra dimension to your café and really keep people interested. 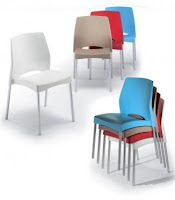 Dining furniture is extremely scalable, so there are plenty of opportunities for extra discount when fitting out larger areas. For bulk orders, we're often able to provide even higher rates of discount than we already offer, so all you have to do is get in touch for a quote and we'll be happy to see how we can help you out!

It's not uncommon for the majority of businesses to hear grumbled phrases about things not always being 'how they used to be'. Our nostalgia for traditional designs, techniques and practices certainly extends into the office furniture industry, and we can definitely see why. There have been some beautiful furniture designs over the years, designs that for many are proving difficult to let go.

To cater for this niche, we have a range of reproduction furniture that features classical designs that we can't see ever going out of fashion. From Chesterfield sofas and Georgian style bookcases through to partners desks and leather topped writing tables, we have traditionally styled reproduction furniture to satisfy even the most  reminiscent of furniture fanatics. Traditional designs have been expertly reproduced for the current market by utilising modern manufacturing techniques.


Traditional production methods have been modernised to make our reproduction furniture more environmentally and commercially viable, whilst the finish quality of the furniture remains as good as it has ever been. The ranges feature the top quality leathers and veneers that you'd expect, whilst the recent advancements in manufacturing techniques mean that reproduction furniture doesn't necessarily have to come with the intimidating price tag that it was once associated with.


We know that different businesses need to portray a different image to their clients, and that the traditional style won't suit everyone, but for those that want to illustrate their affiliation with the classical designs this is a fantastic option.

Call centre operations are rapidly returning to the UK. After a short period of high volumes of work being outsourced to India and the Far East, the need for call centre furniture in the UK is on the rise once again. Call centre furniture differs from more conventional office setups because they have to accommodate different needs - they generally need less space per user, but more sound insulation than traditional office environments. Slightly contradictory needs when you consider that the employer will want to fit in as many workers as possible!

The issue of sound insulation has led to a general shift away from the more traditional cluster designs of call centre furniture in favour of linear bench desks. This has the big advantage of spreading the directions in which the sound can travel - rather than having everyone talking into the same central point. If users are positioned in a rectangular configuration, as oppose to a traditional cluster, then they will face less distractions and be able to communicate on the phone more succinctly.

The use of dividing screens are also a very effective way of reducing noise pollution in your call centre. They create a more personal workstation for each user, and act as a barrier for travelling sounds. Upholstered screens in particular are a great way of insulating sound to minimise the effect it has on surrounding workers. That's not to say that call centre workers will become cocooned within their own workstations of course, as the surrounding space can be made light and open to encourage social interaction.

The development of breakout areas in large call centre environments encourage the social element of office work. They provide a space for employees to eat their lunch and catch up with colleagues, and have become a proven way of encouraging good job satisfaction. It might sound like a very basic addition to your call centre, but breakout areas provide employees with a space away from their desk to relax and regenerate. They really help to boost productivity, comfort and job satisfaction - all of which are integral to the success of your business!
Posted by Unknown at 03:53 3 comments: